I love my two cats dearly and they bring a lot of joy to my life, but they also bring other things, like poop, and fur.  When I tried to research mitigations for any of these it was 100% SEO listicles, so I’m sharing my raw data in the hopes that the next person can find something real-if-incomplete instead of a list of every automated litter box that has ever been manufactured.

I wrote the bulk of this in February, but then one of the cats developed dermatitis and I put it on pause until I could make sure it wasn’t caused by anything on this list. Alas, it wasn’t, she’s just allergic to my new apartment. But then I wanted to test something else, and suddenly six months had passed. So if the tenses seem weird, that’s why.

(Links are affiliate links when possible)

I screwed up choosing my new apartment (this was written before the allergy thing). I remembered to check for space to put the litter box in the bathroom, but in my joy at finding a place that allowed that at all after so many that did not,  I forgot to check if that space was also where you stood to wash your hands. So I ended up having to put the box in the living room. I’ve done that before and didn’t want to go back to having to keep the window open year round and still smelling poop. I also didn’t love the aesthetic.  So I set up something kind of elaborate.

This is a long piece of hosing with a gentle fan in it, and a plastic thingy to block off a window that has a hole for the hose to connect to (similar to what you’d use for a portable air conditioner) The window-blocking thing works vertically but won’t stay up on its own, I had to tape it. The fan is extremely quiet, you can’t tell it’s on from more than six inches away. I’m very sure it works because the first time I noticed a smell, I found the fan had been turned off.

There are instructions for how to DIY this available online (e.g. here), but I just bought it and it worked fine.

To make it less hideous, I got an end table designed to hold a litter box. Amazon is full of these, but most have only a single entrance and no ventilation. I assume these are aimed at people who haven’t thought things through. I wanted something I could connect a vent to and actually get rid of the smell. You might be able to cut a hole in one of the ventless ones to attach the hose to but I didn’t feel like bothering, so I got one with ventilation. 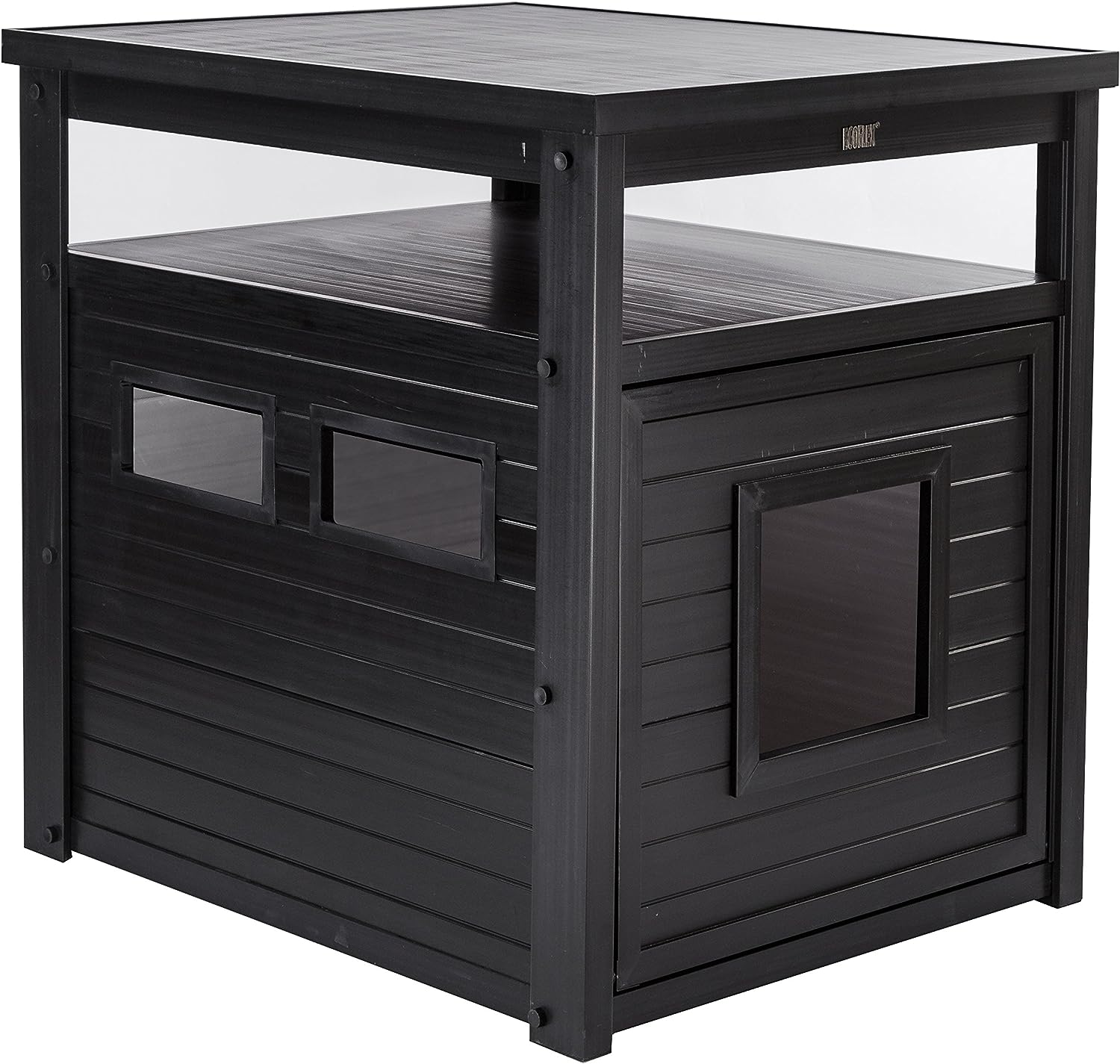 I chose ecoFlex (affiliate link)  because matched my it existing furniture and was the only option with both ventilation holes and a second shelf. For this, I accepted it being really much larger than it needed to be. Also the copytext said something about liquid-proof, non-smell-absorbant material, although who knows how true that is. Then I packing taped the ventilation hose to a hole in the back that wasn’t shown in the pictures, apparently intended for electric cords to automated litter boxes.

My cats adapted stupidly well to this- when I set up the litter box with the door open, they both used it within 10 minutes, despite their other litter box still being available. They did just as well when I closed the door.

Some litter does escape the table, so have a plan for that.

My weird conservation instincts push me not to empty the litter box until I can fill a bag. Otherwise I’m wasting valuable bag. So I bought a bunch of very small, very cheap bags and stored them in that shelf in the litter box end table, which is why I wanted it so much. I chose Amazon Basics Dog Poop Bags (affiliate link) based on WireCutter’s recommendation and so far they are resoundingly fine.

I got this because Sweethome recommended it. I didn’t appreciate how much better it was working until a delivery screw up made me use Arm and Hammer and there started to be a smell where there hadn’t been before.

This is so close to being a truly great product, but isn’t quite reliable enough to be the only litter box. It had a tendency to get stuck in an unusable position, which eventually forces the cats to go elsewhere. The drawer the poop stays in doesn’t completely contain the smell. Also the range of litter between “excess will get dumped” and “too low” is uncomfortably thin. I’d still recommend it as a second litter box to cut down on scooping, or in a populous household where there will always be someone to turn it off and on again. 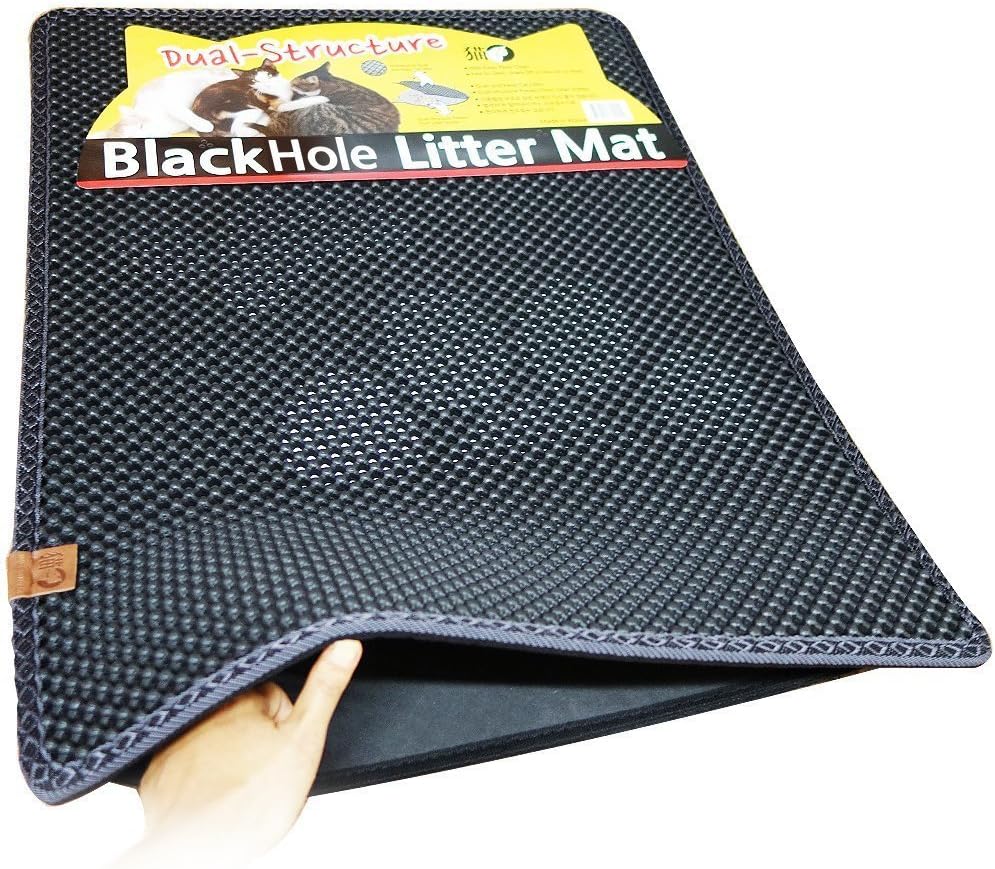 This actually worked great at its stated purpose of catching litter the cats track out of the box, but when the cats pooped on it (say, because the litter box had been upside down for six hours), it was almost impossible to clean, especially if I caught it less than instantly. Plus it is ugly.

Open Window with a Fan

This was definitely better than not having an open window with a fan, but there’s no comparison between it and the vent-with-hose. 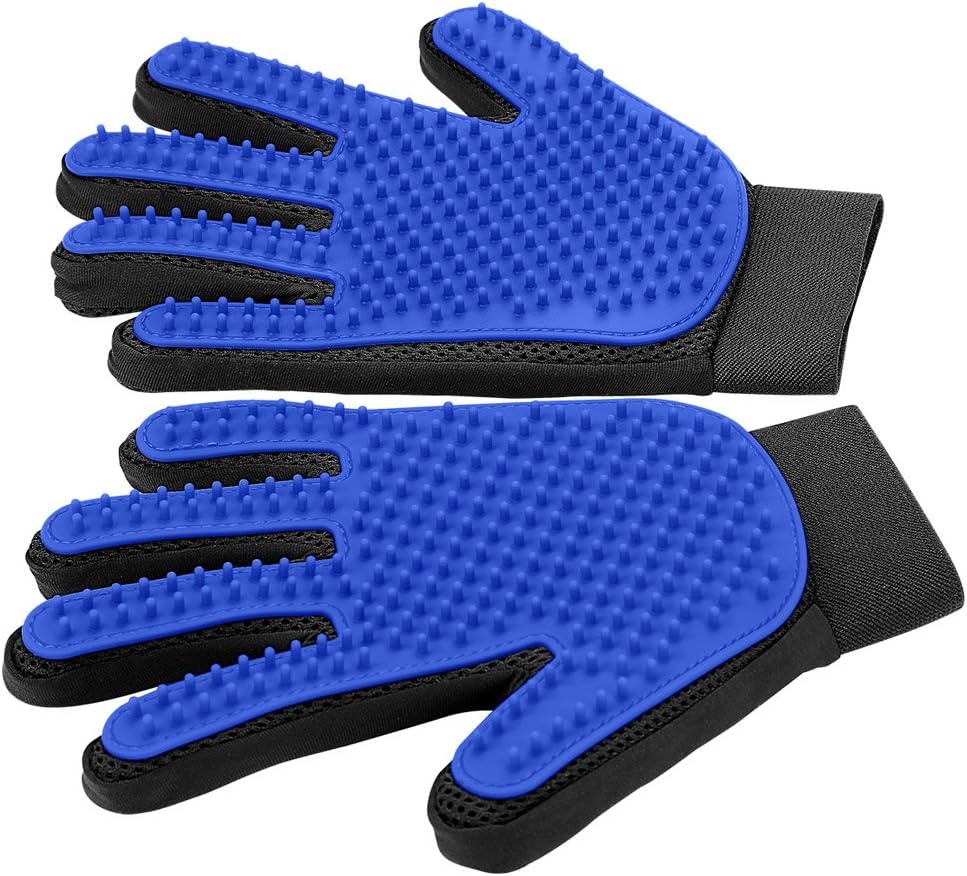 These collect a lot of hair, plus their squishiness means you can brush bony areas that would be a problem for a metal comb. The cats start purring the instant I pet them with these.

Downside: kind of a pain to get the hair off the glove, does not pick up 100% of the fur it loosens, so be sure to use it somewhere easy to vacuum or at least not your own lap.

Turns out dryers are reasonably good at removing cat hair if you wait long enough. Remember to clean the lint trap frequently. 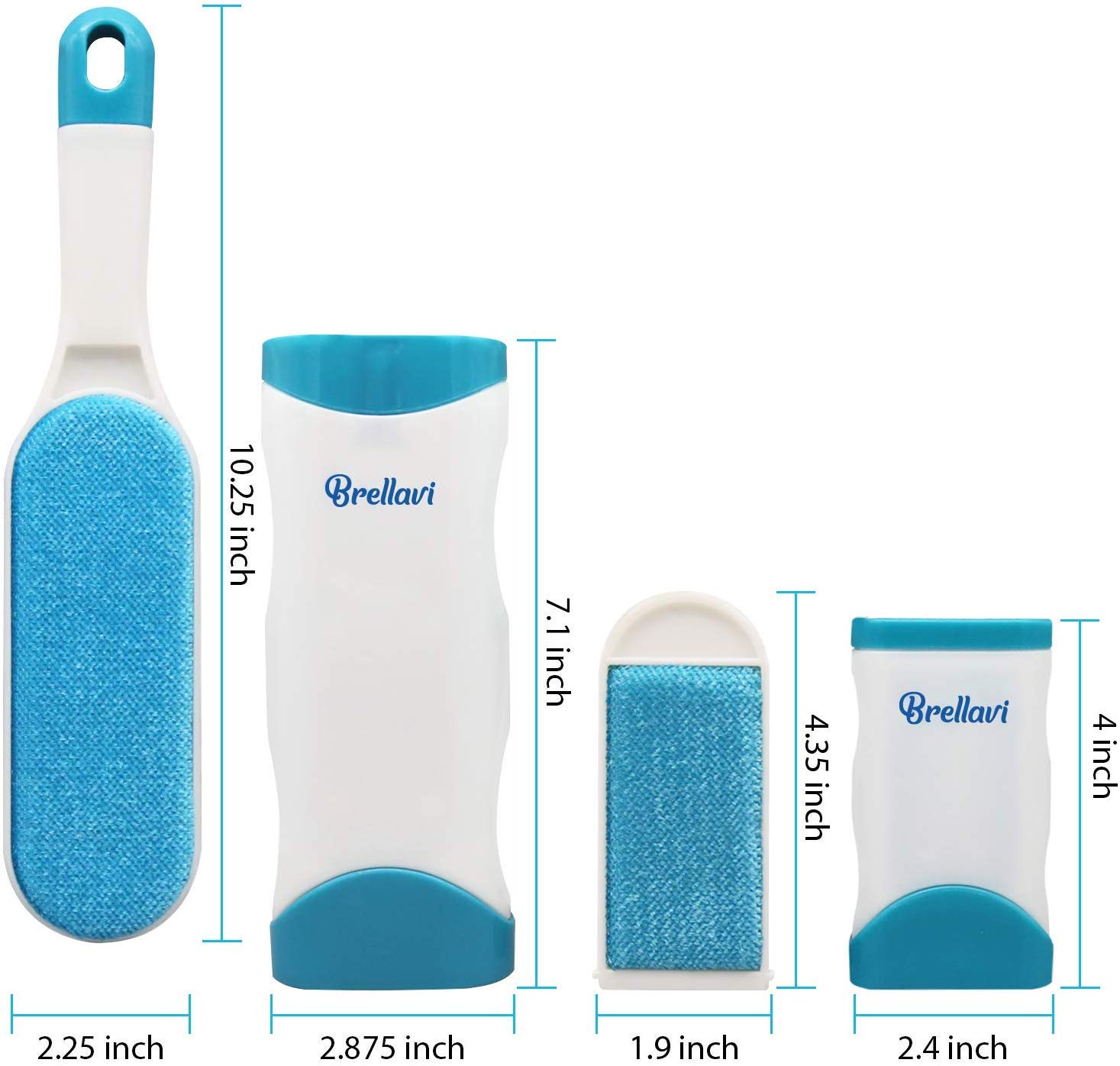 and a more traditional roller shaped one (affiliate link) 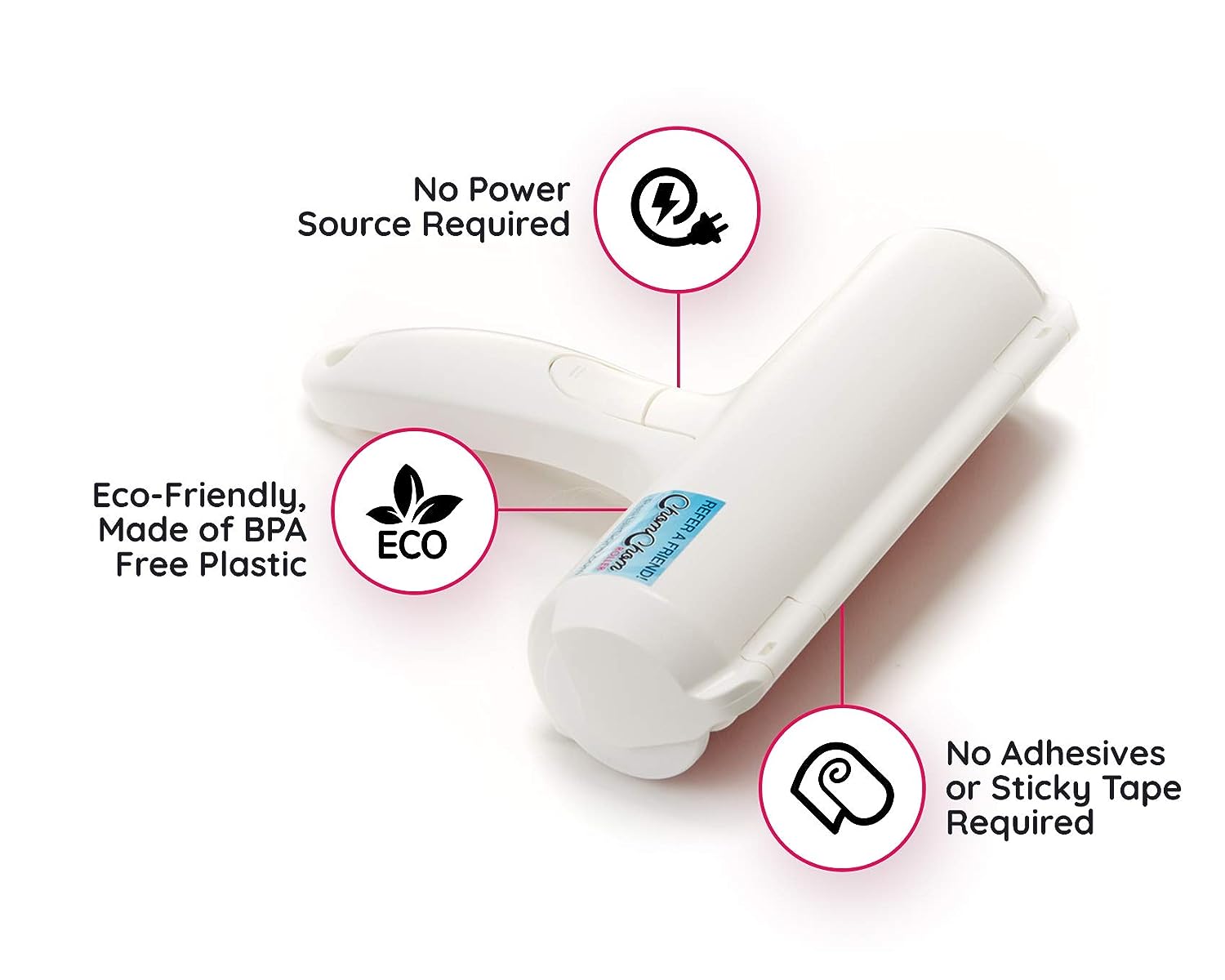 Of these, I found the wand shaped one easier to use, and the roller easier to clean. I prioritized use, but your mileage may vary. Also, you need to actually read the instructions on how to use it, running it back and forth like disposable lint roller just redistributes the hair.

Here is a picture of a pillow after I ran the paddle shaped one over part of it several times. I think this gives a good idea of what it’s capable of, i.e. it’s a significant improvement but doesn’t get everything.

Note: inbetween writing this and publishing, the paddle brush people offered me actual money to publish a review, which I plan on taking them up on, assuming I can find the form.

Sweethome’s top handheld vacuum pick was sold out everywhere and their second is specifically called out as being bad at fur, so I selected based on Amazon reviews. As a vacuum cleaner it is Not Fucking Around- it is super powerful and sucks anything off my floors. It advertises a special whirling brush aimed specifically at pet hair, but I found it choked on soft surface I tried it on, and the bristles were better. The biggest complain on Amazon was the battery life, but I got it for spot cleaning not marathons, so it’s been fine and I appreciate not paying for a feature I don’t use.

All of the anti-cat-hair devices work better if I stay very on top of them. Given time, the fur works itself deeper into the fabric and nothing will work except picking it out with actual human fingers.

This is another one that was great at its official objective but failed a secret objective. It was absolutely amazing at removing fur from the cats (on areas broad and unbony enough to support the comb), and they liked it, but it left them less soft. I did not get these cats to have them at less than their maximum softness.

Rubber Thingies You Throw in the Washer and Dryer 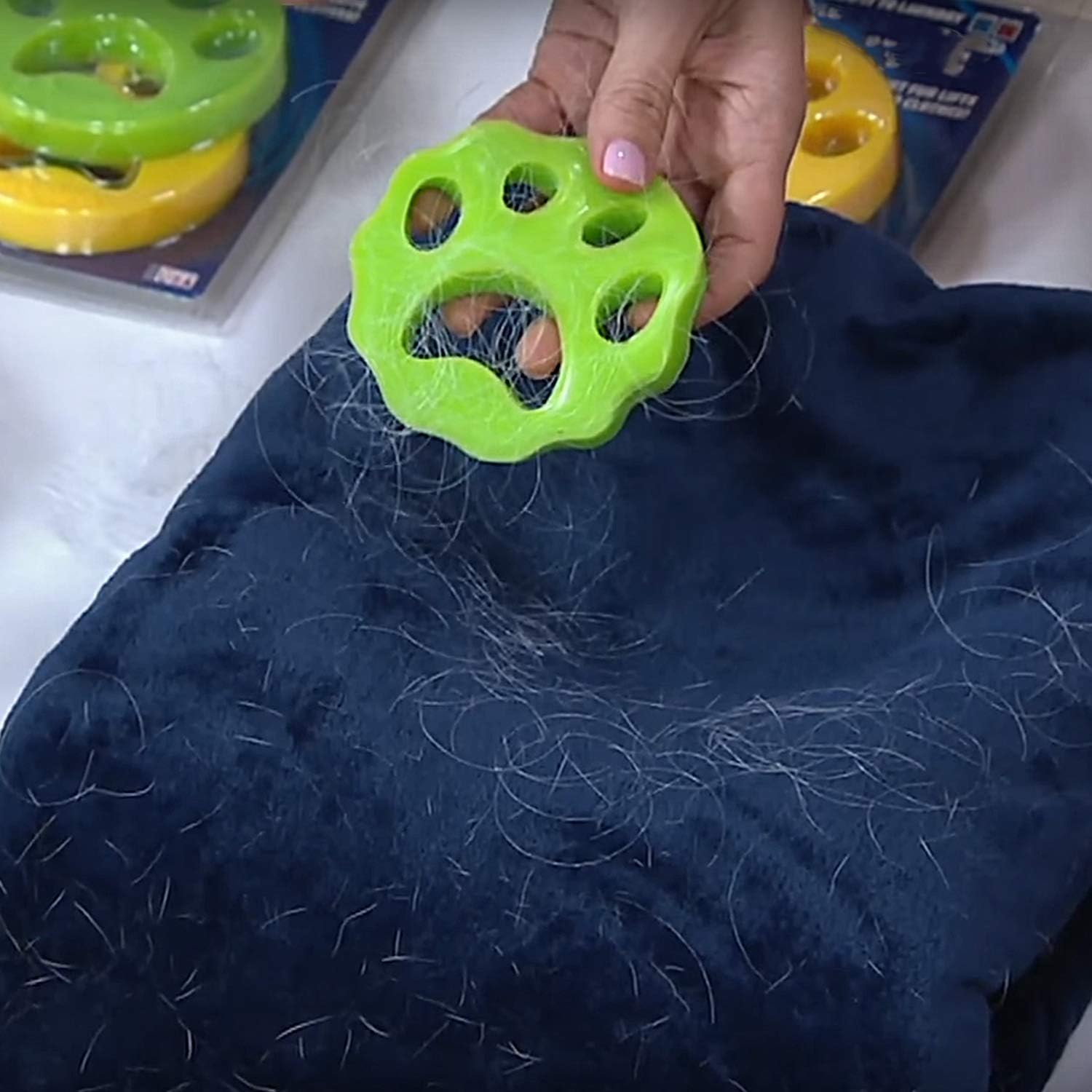 I ran an experiment and as far as I can tell these are no better than just running an article through the dryer. Before/after photos (which I unfortunately didn’t save) didn’t show more hair being removed and the thingies are completely free of hair after many uses, which suggests to me they’re not helping much.

I tried wetting them and running them over a pillow case and they indeed picked up something, so I’m leaving them in my washer just in case.

I used LEADTEAM (affiliate link) and didn’t test any others, they looked identical. 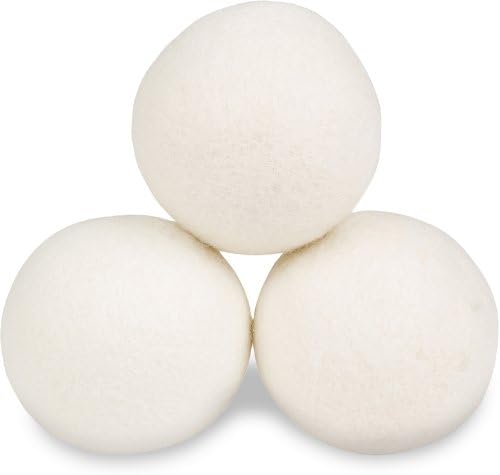 Testing the dryer inserts is difficult because it’s really hard to get a control group. I can’t put in half a blanket and see what the other half does. I can’t even use my two identical blankets, because they’re not guaranteed to have identical amounts of hair on them. I tried with socks but was kind of out of patience by that point. I was pretty confident the rubber ones were doing nothing, but despite a really silly amount of rigor involving photos and test swabs with the lint roller, I just can’t tell with these.

These were better than nothing but not as good as the reusable roller.

My cats were never great at eating but had gotten to the point where between the two of them someone was vomiting almost every day without cause (cause = “I went too long without eating”, “I ate too fast because I went too long without eating” and hairballs), and one had lost a noticeable amount of weight (her current weight would be fine if she’d started there, but losing almost 20% of her body weight for no known reason is concerning). There was also behavior that made me think they didn’t like their food- things like persistently begging and then when I put new food down, sniffing it, looking upset and begging more. So I talked to the vet.

I started both of these at the same time and now the cats are down to vomiting once a week, tops, some of which is for cause. They don’t love the prescription food by they will eat it. They’re fine with the vitamins. 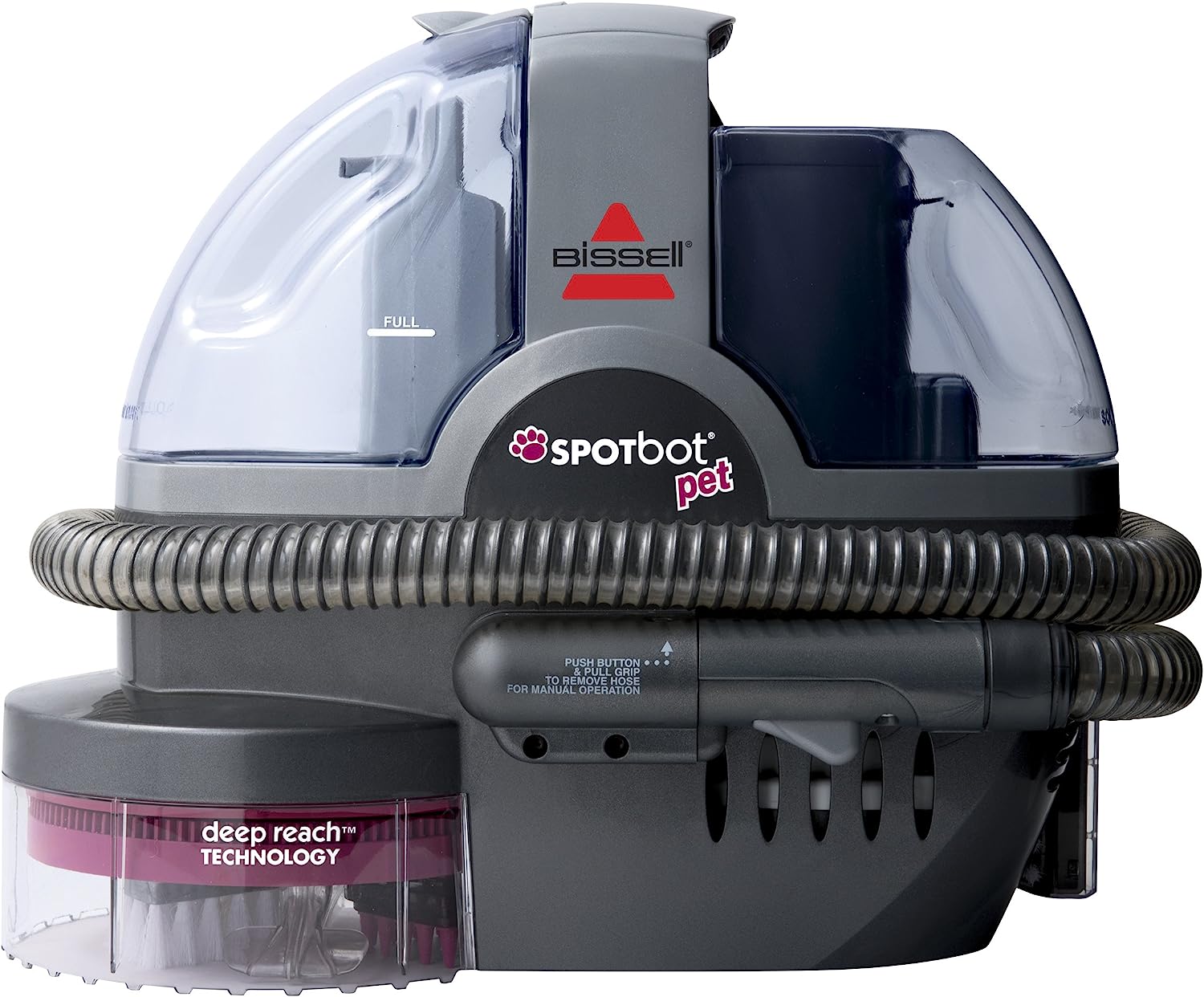 This carpet cleaner deep cleans the 9 inch (?) circle you put it down on. This is the perfect size for cat vomit. I only used this for 9 months until I moved somewhere with hardwood, but I did get the security deposit back on the carpeted place.

Downsides: noisy; downstairs neighbor will complain if you use it too late.

Between the vomiting and the hair, it was really essential my couch have a removable, washable, dryer-able cover. I got a couch that came with removable, replaceable covers, but

At which point the covers might as well be attached to the cushions after all. I selected a more universal couch cover from amazon with the qualifications that

That left me a single choice, the Chun-Yi one piece (affiliate link).  Elsewhere in this article I’ve stolen Amazon’s pictures to showcase an object: in this case I’m deliberately not doing so, because this cover does not look much like the picture. It fits fine, but not nearly as crispy as implied, and the color is off.

Having a loose cover like this is also a pain in the ass for spot-hair-removals with the vacuum cleaner, because as mentioned above the vacuum cleaner’s fancy twirling brush just sucks the cover off the couch. The with bristles works well enough but still requires two hands to do well with.