I’ve been known to accuse people who say open offices are “fine with a few mitigations” of not paying attention to the cost of their mitigations. I believed they shrunk their thoughts down to the point that not much was lost from an interruption, at the cost of only being able to think the thoughts that fit in that interval. Any thought that would take too long to process could not be conceived of.

I’ve also been known to accuse people who advocate for deep, uninterrupted work without the distractions of social media of “not understanding how valuable social media is to me”. And  besides, my workflow works best with frequent breaks (that I choose the timing of) because I “background process”.

I maintained this illusion until, inspired by a stupidly expensive device that only does one thing, I taped my old phone to a bluetooth keyboard* and began to write in offline mode. It was immediately a magical experience. It was so *quiet*. I could go on my porch and write and it was quiet. My thoughts got much larger because I wasn’t subconsciously afraid I’d interrupt them. I began to feel angry at my laptop. Why did it insist on hurting me so much? Why couldn’t it be pure like the offline phone/keyboard experience? Why couldn’t I just create things?

[* I only found two bluetooth keyboards with an inlay for phones/tablets. The other one lacks a built in battery, and shipped with a broken key]

Locally, this lasted for about 10 minutes before the social media cravings kicked in. But that was enough. I deeply resented work for taking me away from my magic writing device and making everything so noisy.

Since I started, my desire for using the quiet device has waxed and waned. At first I thought this was reflective of some deep pathology, but after two weeks it looks a lot more like “sometimes the benefits of quiet outweighs the benefits of being able to look stuff up, sometimes they don’t’”.  I’ve also changed how I interact on a connected device- I’m more likely to close Signal, less likely to open Twitter. This is less due to a utilitarian calculation of the costs and benefits of Twitter, and more that once I’m in a good state, I can notice how switching to Twitter is almost physically painful.

The problem is that I wasn’t wrong that social media was genuinely very valuable to me, and that was before we were all locked inside. But I definitely was wrong that getting those benefits were costless, in a way very analogous to mistakes I accused others of making. I’m glad I have the information now, but I haven’t figured out what to do with it yet.

Last month I investigated commonalities between recessions of the last 50 years or so. But of course this recession will be different, because (among other things) we will simultaneously have a labor shortage and a lot of people out of work. That’s really weird, and there’s almost no historical precedent- the 1918 pandemic took place during a war, and neither 1957 nor 1968 left enough of an impression to have a single book dedicated to them.

So I expanded out from pandemics, and started looking for recessions that were caused by any kind of exogenous shock. The best one I found was the 1973 Oil Crisis. That was kicked off by Arab nations refusing to ship oil to allies who had assisted Israel during the Yom Kippur war- as close as you can get to an economic impact without an economic cause. I started to investigate the 1973 crisis as the one example I could find of a recession caused by a sudden decrease in a basic component of production, for reasons other than economic games.

Spoiler alert: that recession was not caused by a sudden decrease in a basic component of production either.

Why am I so sure of this? Here’s a short list of little things,

But here’s the big one: we measure the price of oil in USD. That’s understandable, since oil sales are legally required to be denominated in dollars. But the US dollar underwent a massive overhaul in 1971, when America decided it was tired of some parts of the Bretton Woods Agreement. Previously, the US, Japan, Canada, Australia and many European countries maintained peg (set exchange rate)  between all other currencies and USD, which was itself pegged to gold. In 1971 the US decided not to bother with the gold part anymore, causing other countries to break their peg. I’m sure why we did this is also an interesting story, but I haven’t dug into it yet, because what came after 1971 is interesting enough.  The currency of several countries appreciated noticeably (Germany, Switzerland, Japan, France, Belgium, Holland, and Sweden)…

(I apologize for the inconsistent axes, they’re the best I could do) 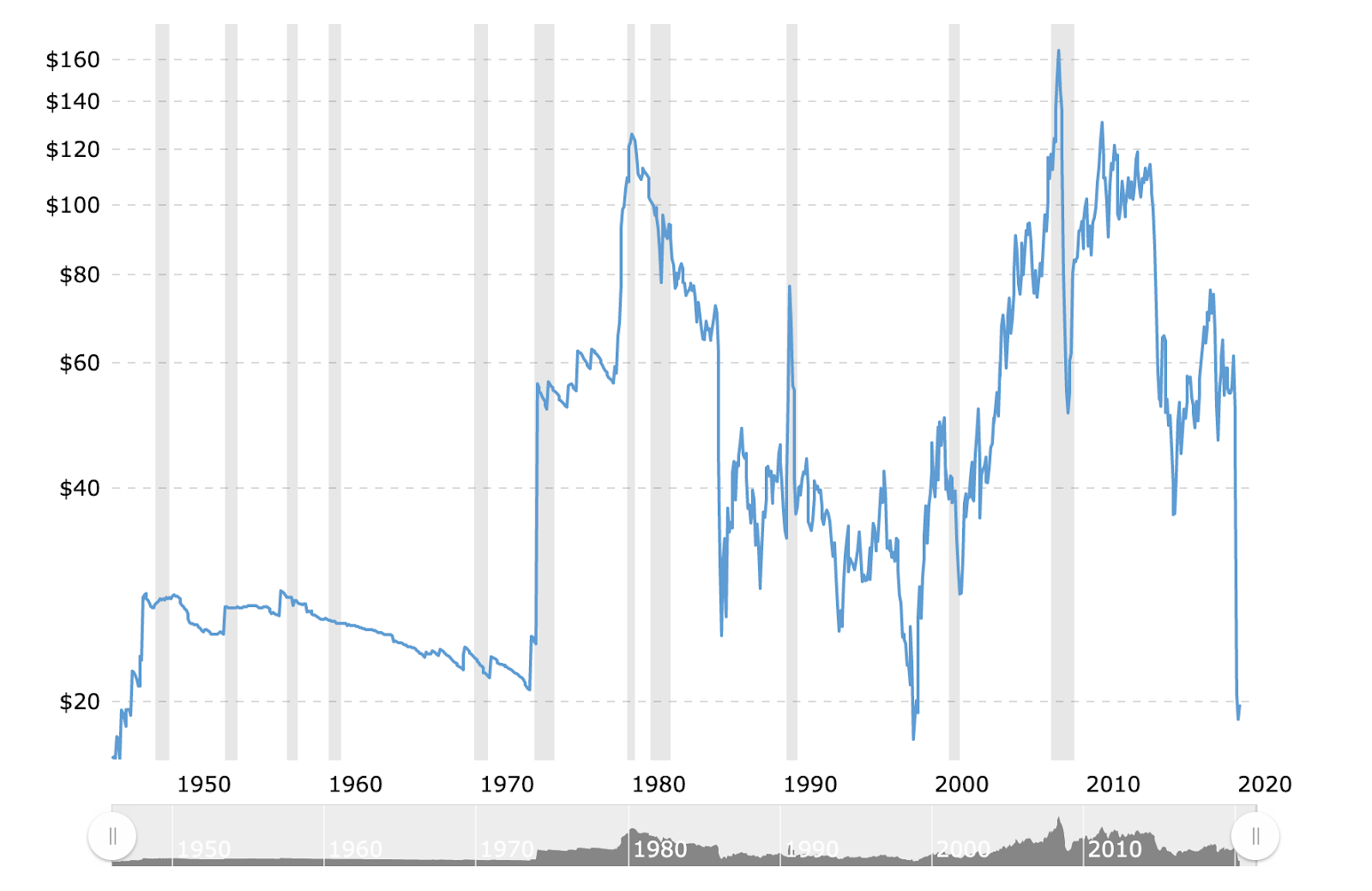 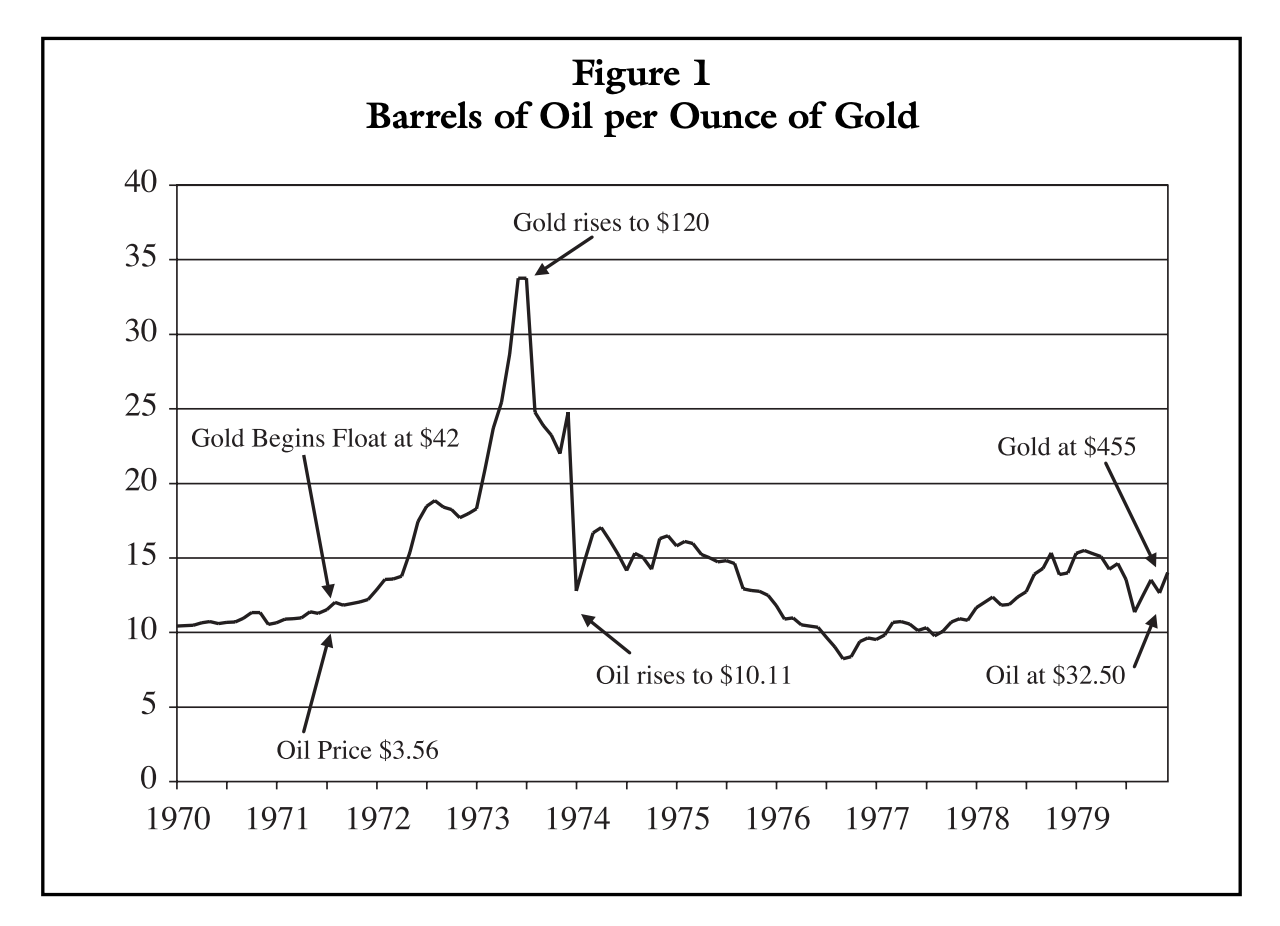 (apologies for these axes too- the spike in this graph means oil was was worth less, because you could buy more with the same amount of gold)

This is a little confusing, so here’s a timeline:

This is not the timeline you’d expect to see if the Yom Kippur war caused a supply shock in oil, leading to a recession.

My best guess is that something was going wrong in the US and world economy well before 1971, but the market was not being allowed to adjust. Breaking Bretton Woods took the finger out of the dyke and everything fluctuated wildly for a few years until the world reached a new equilibrium (including some new and different economic games).The Yom Kippur war was a catalyst or excuse for raising the price of oil, but not the cause.

Thanks to my Patreon subscribers for funding this research, and several reviewers for checking my research and writing.

Long time readers may remember when I endorsed Kencko, a collection of freeze dried fruit and vegetable powders in convenient packaging. I was extremely excited about Kencko, because I have various food issues that lead to not eating enough produce, freeze drying maintains most nutritional value, and powders are really easy for me. Or, they usually are. For reasons I never figured out, Kencko made me vomit. I looked around for better but couldn’t find any, and dropped it.

My interest in produce powders was re-aroused recently by concerns about the food supply chain in the US. I don’t think we’re going to starve, but I do think produce variety will be severely curtained, price will go up, and more produce will be processed rather than fresh or frozen (because harvest for processing requires less manpower). Shelf-stable produce that didn’t take up much space was suddenly attractive.

Eventually I found ENOF, which:

If you are interested, I have a 25% off code here: SBHBJZGJ, which you will need, because this product is not cheap. This is not a referral code, I don’t get any money for you using it, I’m not even sure it will work for more than one person because it was sent to me personally (immediately after I made a large purchase

). I honestly thought about not publishing this because I don’t want them to run out, but I decided  that I would be prosocial and share.