Despite not normally being a fan of military history, I’ve really enjoyed Bret Devereaux’s blog Acoup, in which he uses pop culture representations as a starting point to teach the subject. Unfortunately I got stuck in a loop where I didn’t want to read Acoup without fact checking at least one post, and I didn’t want to fact check a post because military history is boring when taught by anyone besides him and Dan Carlin (and I was really disappointed in Carlin’s book. Why, you might ask? Yes, I too wish I’d written that down).

But I really wanted to start reading Acoup again. My compromise is to:

And now, a good old fashioned epistemic spot check of Bret Devereaux’s This Is Not Sparta.

Devereaux is not so much sharing historical facts as comprehensive models, informed by both local facts about the specific area of interest and general knowledge of humans and historical trends. This is great and I wish more people would do it. Along the way he sometimes presents facts as more certain/less controversial among historians than they are. He’s not hiding that he does this, but on first read through I did walk away with the impression that certain things were more settled than they are, and unprepared to argue for their truth.

E.g., Acoup describes helots not only as slaves, but as slaves that were especially poorly treated even by the standards of the time.

First, let us dispense with the argument, sometimes offered, that the helots were more like medieval serfs than slaves as we understand the ideas and thus not really slaves – this is nonsense. Helots seem to have been able to own moveable property (money, clothing etc), but in fact this is true of many ancient slaves, including Roman ones (the Roman’s called this quasi-property peculium, which also applied to the property of children and even many women who were under the legal power (potestas) of another). Owning small amounts of moveable property was not rare among ancient non-free individuals (or, for that matter, other forms of slavery).

As noted below, this is not the consensus view. The writing leaves me with a good sense of why Devereaux believes what he believes, but not prepared to teach the controversy. I think if I started an argument with a helots-are-serfs partisan based purely on this blog post, I would look stupid and unprepared. Which is fine. The goal of the post is not to help me look smart at parties with classicists, it’s to leave me with better models of militant societies as a group. This is a restatement of the truism that if you really care about something you should probably read more than one source.

A broader example is that Devereaux fills in the paucity of written records about helot life with patterns known from other slave societies.  E.g. there isn’t actually a written reference to Spartiate men (the Spartan nobles) raping helot women. But we can take a look around at better documented slave societies, and at the legal code around the existence of children with Spartiate fathers and helot mothers, and make some educated guesses. This is a good and reasonable thing to do if what you want to do is picture ancient Sparta more accurately, but should not be double counted as evidence for the trends and patterns used to fill in the gaps.

I feel dumb ending with the conclusion “this is good but also never rely on one source.” You knew that already, and so did I, and yet doing this spot check made me more cautious in relying on Acoup than I previously was. Humans, man.

Full notes are available in my Roam graph

All claims are taken from posts 1 and 2 in the Sparta series. Claims were selected for being easy to verify and do not in the slightest constitute a random sample.

Claim: “Sparta was not a city-state for the simple reason that it didn’t have a city – it had five villages instead”
Verdict: Plausible, subject to arguments on definitions. It’s easy to find tertiary sources describing Sparta as a city, but none saying “I have considered the possibility that Sparta was in fact five villages in a trenchcoat and rejected it for these reasons”. I couldn’t actually find any references to Sparta being five villages- sources that described it as an amalgamation always said four. Bu when I reached out to Mr. Devereaux’s Twitter he explained that he was counting a fifth village that had joined later (he also acknowledged there was some controversy in the description, which he didn’t in the original post). I still wish this had come with exact definitions of what constitutes a city vs a village, and what the implications of the difference are.

Claim: “Spartan boys were, at age seven, removed from their families and  instead grouped into herds (agelai) under the supervision of a single adult male Spartan”… “While the heirs of Sparta’s two hereditary kings were exempt from the agoge – perhaps because the state couldn’t afford to risk their lives so callously – Leonidas was a younger brother and thus was not exempt”
Verdict: confirmed in secondary source (although Devereaux goes to pains to point out the biases of the secondary sources)

Claim: “The boys were intentionally underfed. They were thus encouraged to steal in order to make up the difference, but severely beaten if caught”
Verdict: confirmed in secondary source

Claim: “Not even the exemplary boys escaped the violence, since the Spartan youths were annually whipped at the Altar of Artemis Orthia”
Verdict: confirmed in tertiary source

Claim: “Then there is the issue of relationships. At age **twelve** (Plut. Lyc. 17.1) boys in the agoge would enter a relationship with an older man – Plutarch’s language is quite clear that this is a sexual relationship (note also Aelian VH. 3.10, similarly blunt).”
Verdict: Well supported inference, not actually proven. My literal reading of the sources cited leaves a lot of ambiguity over whether the relationships were sexual or not. This could be a lack of experience reading between the lines of ancient Greek sources, but other historians who have presumably read them also dispute the claim. Given what we know of violent all-male institutions in general I think it’s an extremely reasonable inference that the relationships were sexual (and by our standards, extremely coercive at a minimum), in fact it would be surprising if they weren’t, but this isn’t a smoking gun.

Claim: “These Spartan boys will have to apply to be part of a mess-group (syssitia – a concept we’ll return to later) when they are twenty”
Verdict: confirmed in tertiary source.

Claim: Some boys in the agoge were selected for the krypteia, which patrolled farms at night to murder slaves.
Verdict: confirmed in tertiary source.

Claim: “we actually know that individual Spartans painted their shields with a variety of individual devices.”
Verdict: Multiple tertiary sources report this being true at the time 300 would have taken place, but that the army kit was eventually standardized.

Claim: The perioikoi were poor farmers on marginal land on the outskirts of sparta. They were free save for mandatory participation in the army, but had no say in government.
Verdict: gist confirmed in tertiary sources.

Claim: “The hypomeiones seem to consist of the men (and their descendants) who had been spartiates, but had been stripped of citizen status for some reason, usually poverty (but sometimes cowardice)”
Verdict: gist confirmed in multiple tertiary sources, sometimes using a narrower definition

Claim: “The mothakes (singular: mothax) seem to have been the bastard off-spring of spartiate men and helot women”
Verdict: gist confirmed in tertiary source, although they seemed to consider hypomeiones a subset of mothakes.

Claim: Neodamodes were freed spartan slaves
Verdict: gist confirmed in tertiary sources, although they refer only to slaves freed for military service 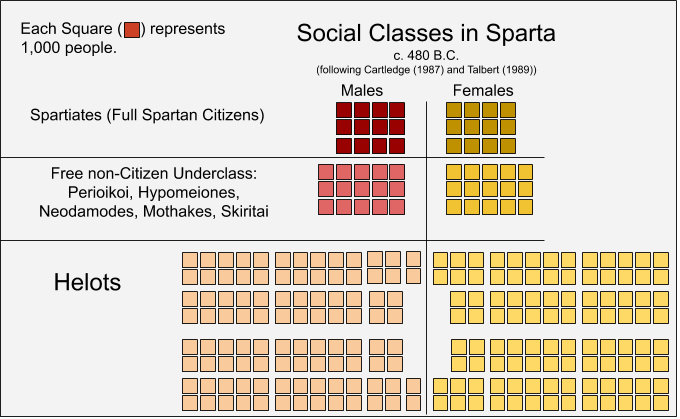 Claim:  Helots were poorly treated slaves, not serfs or a stage between slave and free
Verdict: certainly seems justified, but officially controversial

Thanks to my Patreon patrons for helping to fund this work.

Update 11/25: Bret Devereaux has a few comments about this on Twitter.

Update 11/27: A friend checks the Spartan military record and finds it meh.