“Herpes virus” can refer to several viruses in the herpes family, including chickenpox and Epstein-Barr (which causes mono). All herpesviridae infections are for life: once infected, the virus will curl up in its cell of choice, possibly to leap out and begin reproduction again later. If the virus produces visible symptoms, it is called symptomatic. If the virus is producing viable virions that can infect other people, it’s called shedding. How correlated symptoms and shedding are is the topic of this post.

When people say “herpes” without further specification, they typically mean herpes simplex 1 or 2. HSV1 and 2 are both permanent infections of nerve cells that can lay dormant forever, or intermittently cause painful blisters on mucous membranes (typically mouth or genitals, occasionally eyes, very occasionally elsewhere). There are also concerns about subtle long-term effects, which I do not go into here.

There are two conventional pieces of conventional wisdom on HSV: “you can shed infectious virus at any time, even without a sore. Most people who catch herpes catch it from an asymptomatic individual” and “99.9% of shedding occurs during or right before a blister and there are distinct signs you can recognize if you’re paying attention. If you can recognize an oncoming blister the chances of infecting another human are negligible.” At the request of a client I performed two hours of research to judge between these.

It is definitely true that doctors will only run tests looking for the virus directly (as opposed to antibodies) if you have an active sore. However when researchers proactively sampled asymptomatic individuals using either genetic material tests (PCR/NAAT, which look for viral DNA in a sample) or viral culture (which attempt to breed virus from your test sample in a petri dish), they reliably found some people are shedding virus.

HSV1 prefers the mouth but is well known to infect genitals as well. HSV2 is almost exclusively genital. Due to a dearth of studies I’ve included some HSV2 and genital HSV1 studies.

Tronstein et al: This paper stupidly lumped in “0% shedding” with “>0% shedding” and I hate them. Ignoring that, they found that 10% of all days recorded from individuals with asymptomatic genital HSV2 involved shedding, and these were distributed on a long tail, with the peak at 0-5%. I cannot tell if they lumped 0% and 0.1% together because 0% never happens, or because they hate science. 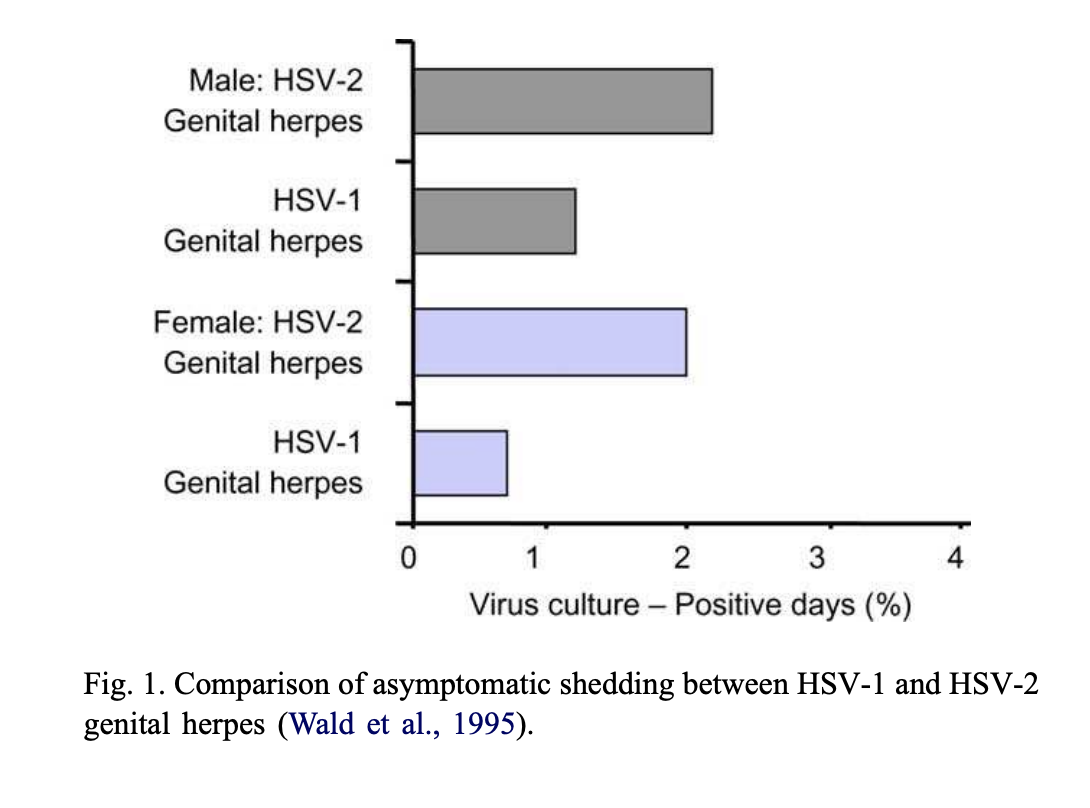 Spruance: oral HSV1 patients shed isolatable virus 7.4% of the time (including while symptomatic). 60% of this occurred while experiencing mild symptoms that could have indicated an upcoming sore, but never developed into a sore.

Tateish et al: tested 1000 samples from oral surgery patients (not filtered for HSV infection status). 4.7% had PCR-detectable herpes DNA, and 2.7% had culturable virus. This includes patients without herpes (about 50% of people in Japan, where the research was done), but oral surgery is stressful and often stems from issues that make it easier to shed herpes, so I consider those to ~cancel out.

My conclusion: it is definitely possible to shed HSV while asymptomatic, including if you are never symptomatic. The daily shedding rate is something like 3-12%, although with lots of interpersonal variability. This doesn’t translate directly to an infectiousness rate: human mouths might be harder or easier to infect than petri dishes (my guess is harder, based on the continued existence of serodiscordant couples). It may be possible for people who are antibody positive for HSV to never shed virus but we don’t know because no one ran the right tests.

Thanks to anonymous client for funding the initial research and my Patreon patrons for supporting the public write-up.